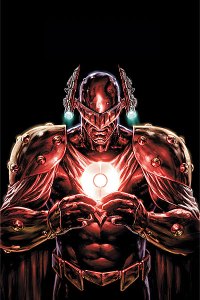 Just by looking over at our tag cloud it’s fairly easy to see how gay I am for  Batman (in a hetero way, REALLY!).  So when Grant Morrison introduced Prometheus — ostensibly the anti-Batman — during his JLA run in 1998, I was pretty psyched.  Morrison wrote his first two appearances and made him out to be a real contender, first holding the entire League hostage on-board their own satellite and coming up with intricate death traps for each Leaguer.  In his second appearance he joined forces with Lex Luthor’s Injustice Gang and fought Batman to a draw…At least for a few minutes.

Which brings us to the Dream Team. Since Morrison’s JLA run not enough has been done with this character, and though I’ve always been drawn to his subsequent appearances (notably in Hush Returns and Cry for Justice) he’s been treated as something as a joke since leaving Morrison’s hands. So much so, that DC retconned out some of his previous appearances as the work of a poseur SECOND Prometheus!  (I suspect that’s because his two defeats in Morrison books — once due to a whip to the junk and once to Batman giving him Motor Neuron Disease — have been somewhat novel if not jokey, and so it was easy to forget the badassery that got him to that point to being with.)

What would really pop and bring him back to his  deserved eminent status? An ongoing that would really emphasize the flip side of Batman that Morrison initially established.  Give him an evil sidekick (too bad Damian is on the side of the angels for now), a base of operations, and a consulting role with the Secret Society and really let the madness fly.  As the character’s creator, Grant Morrison would obviously have to be the writer.  He appears to be the only author to get the character, and his work on Batman is proof that he could write it full-time, he would just have to consider the villainous side of the Dark Knight.  For the art, Rags Morales would be a great pairing.  His work on Identity Crisis proves he can nail the big guns of the DCU, and his stellar work on the Hourman series shows that he can draw the lesser-seen dark corners where this book would have to take place.

Skulking in the recesses of the DCU: Yesterday’s villain, Today!