I didn’t post reviews last week because there wasn’t much to say that hadn’t been said before. I will say that FF #1 was a great solid start/ transition. Hickman continues to be a master at crafting stories that are interesting with enough material to feel full for an issue and enough mystery to pick up the next. So…. how was this week? 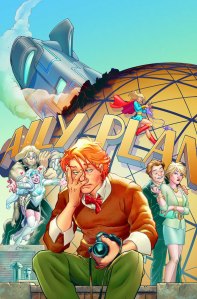 The winner of Wednesday is hands down Nick Spencer’s Jimmy Olsen #1. The amazing thing about this one shot is that half of it reprints Spencer’s back-up feature from Action Comics. The framing device was always a sort of week-in-the-life-of-Jimmy-Olsen, but we didn’t get the entire week until now. These adventures are distilled mad-cap. Spencer took the best parts of Silver Age Jimmy and gave it some modern character and zip. From 5th Dimensional madness to the Mobile Newsroom to plot to take over the internet the stories fly. If you missed these stories the first time around, the $5.99 cover price is worth it even the second time around.

No other books this week fared as well.

Cornell’s Action Comics #899 started out really well. His version of a battle of wits between Luthor and Brainic is not to be missed. Unfortunately, this takes up only half of the issue. The other half can best be explained in the phrase, “Come again?” or in the parlance of our times, “WTF?” There’s a Phantom Zone space god and a battle on the astral plane… uh….yeah.

Age of X: Universe is bizarre. It’s got that same feel uncomfortable squirmy feeling that Warren Ellis’ Ruins did. Everything and everyone you know is off kilter in a bad way. The only mostly recognizable person is Sue Storm as she chafes against some of the more extreme measures taken. Tony’s fate in this universe is fascinating and it’s hard to find Bruce tragic (which seems to be what they’re going for) given the Nazi/ Racial overtones of his work in this universe. No clues still as to how this world got so far off track. If you’re looking for something to drop a few bucks on this week, this book isn’t it. 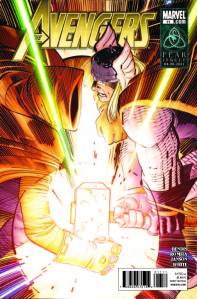 When you’re talking infinity gems, one name probably pops in you head. It probably also isn’t Parker Robbins. In his talkiest issue yet, Bendis has Uatu the Watcher narrate/explain/ blather through the most recent issue of Avengers. I’d be okay with this type of narration if JRJR’s art didn’t SHOW US everything Uatu is explaining. Worst of all, Bendis through Uatu sings a tiresome refrain about how over his head Robbins a.k.a. the Hood is at this moment. He also ham-fistedly reminds us that others more accustom to the gems’ power are probably (read certainly) searching for the gems too. Which boringly telegraphs the last page. I’m officially dropping this book after the arc ends.

I also picked up the Godzilla book, but I imagine Jesse will have more to say about it than I ever could.