It’s been a long 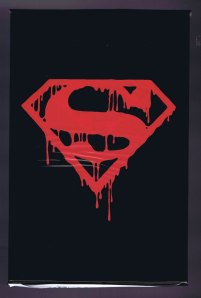 , long while since I’ve written at any length about collecting-related issues, and while I’m a firm believer in reading the comics I buy, I’m still a comic COLLECTOR at heart. Sure I won’t read comics I hate on any principle, but there have definitely been a few shameful instances in my past where I’ve bought two copies of a polybagged book so one can stay “Mint”. (And before you judge me too harshly, ask yourself what state your Superman #75 is in.)
Marvel’s launched an admirable new venture wherein their $3.99 titles* all contain “free” digital download codes so you can use the Marvel app or ComiXology to read the issue on your computer or mobile device. This is smart marketing on Marvel’s part: it costs virtually nothing, acts as a pretty great goodwill gesture, and gives you some lagniappe for your extra dollar (that they would have gotten anyway).
The problem comes in with the presentation, though. Most likely to guard against theft, the digital download code comes covered with a small sticker and lasts for about a year, depending on when you purchase that comic. Anyone who’s read the blog for more than about a week is well aware of my unwillingness to spend $4 for a “Big Two” comic, but now we’re getting to the point where these $3.99 books are making their way to discount bins and this leaves me with a dilemma: what do I do with these codes?
Because I AM a collector I have an (admittedly lame) problem with ripping the stickers off because then the book can no longer be considered complete. Yet the part of me who wants to get the full value for my dollar — and likes digital comics! — says it’s stupid, after 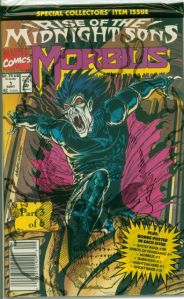 a year the code will be invalidated anyway, so there’s nothing to gain by ignoring the code. We’ve seen this before with Marvel Value Stamps and Image #0 coupons, where if someone cuts a piece out of the comic it legitimately affects the condition of the book, and even though this is a tag clearly designed to be easily removed, there’s still some…modification to the book.
Mike Sterling brings up some good points in his Progressive Ruin blog, mainly about the headache of validating whether a comic is still “intact”. And even though I’m not trying to be the retailer’s advocate here, I can definitely see how that’s unnecessary overhead for them. But as a buyer — whether a comic shop customer or a retailer buying back issues — you should definitely have the right to know if the tag has been pulled and the code used, at least if the book is less than a year old. That gives the owner the right to make up their own mind about whether or not they want to deface their comics.
So what the hell are we supposed to do?
I’ve done way too much thinking about this (read: ANY thinking about this) and loath as I am to admit it, that sticker is a part of the published book in the same way those Image coupons were. Even though they were designed and intended to be pulled, I find it hard to still consider a book “Mint” without it. Not that it’s worth dropping a comic by a grade, I just think they should be identified as “with” or “without” the tag, in the same way Marvel had newsstand and direct market versions of their books in the 90’s. (Again, sorry retailers. I know that’s an unfair burden on you, but it’s got to be done.  Maybe it’s just safest to assume that code is gone at all times.)
That said, I still want my digital comic!  I’ve lost track of the link at this point, but I found a post by an astute reader who realized that if you shine a bright light through the tag and squint, you can make out the code underneath.  This allows you to redeem the code without defacing your books.  And since said code expires in a year, you keep a pristine copy of your book and still get a digital copy.  You can even resell your book and keep the digital copy (as long as you’re honest with the seller, which you will be, right?).

But I want to give the last word to Mr. Sterling, who’s best insight is right in his headline: “This is all assuming there’ll eventually be a back issue market for anything coming out right now.” 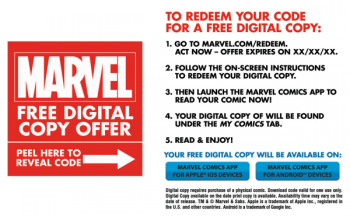 *It’s worth mentioning that Dark Horse’s new Star Wars #1, even at $2.99, had a free digital download code.