Last night I finished The Prisoner’s 5th episode, “Schizoid”.  I don’t think I understood it, but I think I may see

where we’re going.  We open with 6 being shunned by his friends. Apparently his doppelganger, 2 Times 6 (originally 12 in “The Schizoid Man” from the original series), has been impersonating him.  Is he a clone, a duplicate, or a head-trip? Or Michael from The Other Side?

There’s a fascinating game being played here.  2 obviously knows who 2×6 is, but isn’t telling.  In the meantime he plays “Prince and the Pauper” by ruffling himself up and going out into The Village as a numberless man, the un-2.

We do learn a few things, though: The holes are created when 2’s wife is awake, which is why she is drugged and kept asleep.  We’re also told that The Village is in the mind…But is that a metaphor or the truth?  We also find that there are doppelgangers of all our major characters.

So we definitely have two worlds, The Village and The Other Side (our world).  I was originally going to posit that because The Village is supposedly all mental, I think 6 created The Village, and it’s all in his head (we all make our own Villages).  That would probably ALSO make him 1. 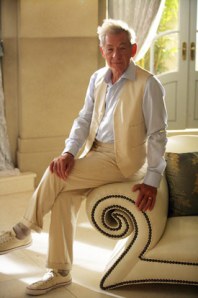 Thinking about it more, that doesn’t fit all the clues.  I think it’s all in M2’s mind, and her dreaming is keeping The Village together.  It also makes sense that real person could show up in a dream but a dream could not go to the Other Side.  The monitors at Summakor would be keeping an eye on the dream world (The Village).

I’ve been cured of my misconception that this is still a spy story. Actually, I think “reimagining” is a good description, as it takes the original theme but makes a completely new story around the idea. Which means it WASN’T the old Number 6 we saw at the beginning (and if they HAD used Patrick McGoohan, that  definitely would have made things more confusing.)

I’m psyched to see how it all wraps up.  The show’s been getting mediocre reviews, so I’ve been worried that I just like this because I like the original, but the way they’ve got me curious for the end, I think I can put that to rest.

One episode left, then a wrap up.  Be Seeing You.