The euphoria of Wednesday books has worn off; now it’s time to review the game tape and see what worked and what didn’t.

First off, I too bought Brightest Day #0. I can’t say anything about it except what Hannibal Tabu pointed out at Buy Pile. I will say that, like the Countdown to Infinite Crisis and Brave New World, this book should have been a dollar. It’s not a book to read; it is a book for laying down and avoiding, to borrow from Monty Python. 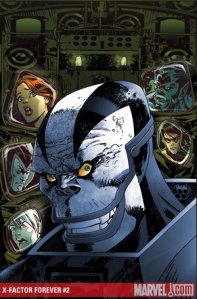 I don’t know why I didn’t mention this last month, but I picked up X-Factor Forever #1. This week, #2 hit the shelves. These Forever books are pretty good. They’re essentially long-form “What If?’s” I’m liking it. In this particular case, Havok and Polaris did not re-form the team. Simonson is giving us a story of the original five being manipulated by Apocalypse. The weird thing is that he’s not as megalomaniacal as sometimes portrayed, and it all ties back into the Celestials. Simonson is also rewriting/ expanding on his origin. Ol’ Lypse is now something closer to Vandal Savage. It really enjoyable so far. If I cared about the characters, I might consider picking up What If Rob Liefeld hadn’t take over New Mutants? too.

John Byrne’s Star Trek: Leonard McCoy, Frontier Doctor #1 shows promise. I wasn’t completely sold until I saw that Bones was sporting his wicked slick beard. So that got me in the door, and the general quality of the sci-story there in will keep me picking up the rest of the series. Surprisingly (?) Byrne really knows his Trek. I mean he’s got the character voices and tone down cold. McCoy is both brilliant and crotchety all at the same time. Lesser writers tend to focus on the grumpy old man, and they forget that this is the Enterprise’s chief medical officer. That’s nothing to sneeze at.

There was also a Parker book out this week. Hulked Out Heroes doesn’t really make sense as a title. Deadpool is the only one we see with Hulk powers. It’s a book I really should have liked more. It’s got Devil Dinosaur, The Thing as a pirate, and it’s Parker penned. Maybe it was the Deadpool; it just fell flat. It wasn’t bad. I simply wasn’t great.

Booster Gold #31 was a heartwarming wrap up of Jurgens’ run on the title. Giffen will take over with the next issue. This one also set up for Booster and Rip to investigate the return of Bruce Wayne.

Secret Six was out this week too and it was a by the book issue.