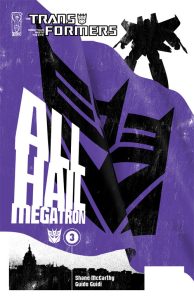 Matt’s been reviewing All Hail Megatron for a while now and giving it relatively mixed reviews.  It’s still been positive enough that when I received some review copies (ie: I saw the trades in the library and checked them out), I was pretty anxious to give them a try.  The result is a mixed bag like Matt said, but there’s a lot to like, especially for someone like me who loves Transformers but hasn’t really been keeping up with the comic series as much as I’d like.
Volumes 1 and 2 are the meat of the story but there’s a pretty steep learning curve.  There’s obviously a significant amount of backstory, but I’m not up to speed on what it is.  We open with the Decepticons destroying New York City with some pretty vile acts of terrorism.  Meanwhile the Autobots are broken, defeated, divided, and stranded on Cybertron.  Humans are putting up a resistance, but it’s not much of one.  As always, Starscream schemes to take over leadership of the Decepticons but Megatron is keeping watch on him as part of some master plan that isn’t yet revealed to us.

The robots in disguise aspect is played up to strong effect in this arc, as the Decepticons really use their alternate modes to strike terror into the human population, coming from nowhere to strike their targets.  This gets back to the core concept which is all-too-often ignored.

Coming in cold like I am, I do wonder what the backstory is.  For the entirety of this volume the Decepticons do evil for it’s own sake, but there’s no real motivation for it yet.  The Autobots, understandably, are anxious to be off their abandoned planet, but we don’t know what happened to it.  I’m okay with coming in during the middle of a story, but it is pretty off-putting to pick up volume 1 of a story and still come in halfway through.  The art is hit or miss: namely it hits when the primary artist is  drawing Transformers, and misses when his backup’s over-simplified art is used for the human scenes.Where this book really shines is its characterization, especially with the Decepticons.  Their ranks and groups really appear to have meaning, particularly with the gestalt groups, but also with the Seekers.  Starscream, Thunkercracker, and Skywarp all have unique abilities, motiviations, and voices rather than being interchangeable cannon fodder.  Frenzy, the crazed tape, is given an especially interesting and well-thought out relationship with Soundwave.

Volume 2 is a fairly straightforward continuation of the story from v1, as the Autobots escape from Cybertron and start defending Earth from the Decepticons.  We find out who the Autobot traitor was (and why) and learn that Optimus and Megatron once had similar motivations.  The Autobots inevitably win and defeat Megatron (or more accurately, convince him that he won’t win), but he gets in a strong monologue with Starscream explaining that Starscream will inevitably take leadership from him (as that is how leadership is always transferred), but it won’t be that day.

Earth lives, which is a nice bonus.

Volume 3 is 5 standalone issues, each spotlighting one Autobot. Most of them are fairly forgettable, but noteworthy for catching us up on some of the backstory that I apparently missed. 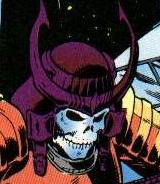 broken down even more, with two 8-page stories per book.  At this point it’s been a while since I’ve read it, but what I remember most is that Don Figueroa’s art looked to the movie for its cues on how the characters should look, which resulted in every Transformer looking like a skeleton, a la Bludgeon.
I’d be remiss if I didn’t mention Trevor Hutchison’s covers, all designed to look like propaganda posters.  They’re entirely unlike anything you would expect to see on the front of a Transformers comic, but they work really, really well.  They’re dynamically designed and stand out on the rack.  Top marks to IDW for taking a chance with them.
After all that…Are they worth it?  I definitely dug the main story.  It was nice to see “robots in disguise” mean something, rather than just have alternate forms solely for transportation.  The spotlight issues were mostly filler, though, and not worth picking up.  I’m definitely looking forward to finding more review copies, as long as I can focus on the main story.