It is, remarkably, a pretty heavy week of comics for me this week! It’s pretty exciting since that almost never happens these days. Here’s what I’m looking at this week.

That’s it for me!  What are YOU looking at?

Still not much out this week, but compared to the last month, it’s like a deluge.  Here’s what I’m looking at this week.

And since I’ve got a lot of extra space to fill up today, a couple quick reviews: 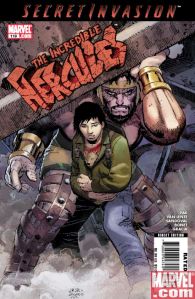 The Incredible Hercules: Secret Invasion – After one week with 2 really solid Hercules books, I took the plunge and picked up this Secret Invasion tie-in book.  Hercules leads a multi-pantheon coalition of gods across the planes of existence in order to kill the Skrull god motivating their takeover over Earth.  It feels like Morrison’s JLA meeting Gaiman’s Sandman with more punching things. And if that sounds like a mess, it doesn’t read like one.  It’s an action-packed adventure with Pak and Van Lente putting it all together seamlessly.  I’ve already ordered more Herc hardcovers and am looking forward to more of the same.  This is what superhero comics should be.

Image United #2 – And then there’s this.  Basically, every review I read about issue 1 applies to this one.  It’s a schizophrenic muddle, and even Kirkman can’t get us from one place to another seamlessly.  I’m really questioning the whole purpose now, which is pretty disappointing given how much I’ve been looking forward to it.  A “preview” of Liefeld’s Bloodstrike doesn’t add much value, either.

So that’s it for me.  What are YOU getting?

Comics Alliance has an excellent piece up right now, The 15 Worst Comics of the Decade.  I have to say, I agree with almost all of it (93.3%, in fact).  It’s well-written, and the Jemas years at Marvel are given their appropriate due.

The one book on the list I take issue with, though, is John Parker’s review of Image United, especially since only one issue has come out so far.  It’s no secret that I’ve been enamored with this book, but I think there are too many pre-suppositions to make this a fair and objective review.  The only people looking forward to this book are men in their 30’s who still read superhero comics?  Like the writers of this piece?  (And yes, me.)

Considering I haven’t read books by most of the Image Founders (Liefeld excluded) in 10+ years, I’m surprised that I’m playing the Image apologist, but just like you can’t blame a Terminator movie for not having enough character moments, you can’t blame an Image jam book for having 6 different art styles and a bunch of splash pages.  You pay your $4, take in the spectacle, and hope you get a fun ride.  So far Image United looks to be doing better than Terminator Salvation.

Sure, it’s not Art (though the art IS purty), but it is pop mayhem, and there’s a place in comics for that, too.  I don’t care about Dennis the Menace, but Fantagraphics is putting out collections like they’re illuminated manuscripts.  And that’s okay.  What’s the harm in looking back, and why is it different for Image than for Hank Ketchum or Ernie Bushmiller?

Sure, Robert Kirkman is basically just there to set scenes, put words in mouths, and get out of the way.  And yes, sometimes styles clash (especially Larsen’s).  But that’s the whole point of this book.

It is obvious to see how self indulgent Image was back then.  And some of that definitely applies now, but I still maintain that this is a decent, readable comic.  I’m not completely blinded by my love of the past, because I paid good money for the recent Youngblood hardcover with the all-new coloring and Joe Casey script.  Casey even reordered pages to make a coherent plot out of the thing and it was still a mess.

Every single one of Parker’s points is valid.  And I’m willing to be completely wrong about every point I’ve made.  I just think there are better choices for a “worst of” list  than a book that’s only seen one issue.  Every other story had a chance to wrap up, I’m just saying let’s wait the 3 years for issue 6 to come out and evaluate it then.

I finally — FINALLY! — got that sweet, sweet Jim Lee cover of Image United #1, so at last I was able to dive in and embrace the madness.

The story is fairly rudimentary: a new Whilce Portacio character called Fortress has a mysterious suit of armor and sees visions of the Image heroes banded together against a common threat, who is revealed as (SPOILER ALERT!) Omega Spawn.  (I find it interesting that all the fanboys who squawked when loser/nobody Nekron was spoiled as the villain of Blackest Night were silent when Image released the news that Al Simmons was the nemesis of this series.)  Robert Kirkman is a solid, dependable writer, and it’s a shame that he’s not given more of a chance to show off like the artists are. However, he knows that the audience wants to see the art, so it’s to his credit that he’s able to fluidly get from scene to scene and keep the plot coherent while still giving each artist his own space to show off.  He is absolutely doing better than his 1992 counterparts, but it’s obvious this story is driven by the artists, not the writer.

And how about that art?  The Image partners are pulling out all the stops, showing off and putting out their best work, possibly even better than their heyday at Marvel or the start of Image.  There’s a level of detail here that we haven’t really seen before.  That may be due to Todd McFarlane, who everyone has admitted  tweaked inks and added lines here and there, but it seems to be working.

I have to admit, it’s pretty cool to see the creators’ characters interacting with each other, not just in big splashy pages like #1, but in scenes where Marc Silvestri’s Cyberforce fights Erik Larsen’s Chickenhead and Sharkface (What?  I don’t know their names!).  The whole book is just FUN.

My only quibble (other than that I just said “quibble”) is that in places it looks like Larsen inked his characters with a sharpie.  That’s a criticism about Larsen’s style, though, not this book, since the whole point of IU is that it’s a jam book.

As self-appointed World’s Foremost Liefeld Scholar (TM), I feel there are several things to note with his contributions specifically.  Just to lay the groundwork here:

With that out of the way, you know how I said this book shows the best work any of these artists have put out in years?  Double that with Liefeld.  Maybe even triple.  He’s doing everything here!  Page layouts, facial expressions, extremities, and it all looks like what I think we wanted his work in the 90’s to look like. And it’s not like he didn’t have the opportunity to hide feet behind mysterious fog, either.

There are two different Youngblood logos in this one panel. Both of them are X-Men rip-offs.

A huge portion of this has to do with his pencils being inked.  I’ve been saying for some time that I think his decision to have his art colored straight from the pencils has been a bad idea. There’s too much sketchiness in the art, so there are far too many lines scattered all about. Being inked allows him to do the pencils he wants, but then go back and refine the line art, getting rid of everything extraneous.  It’s entirely possible that all of this can be credited to Todd McFarlane coming back and making corrections, much like Karl Kesel did on Liefeld’s first work, but at least for the moment (and backed up by seeing hands and feet in Deadpool #900), I’m going to say that we’re seeing some real growth here.

I’d also like to point out the Kirkman/Liefeld commentary track again, partially because it’s relevant, and partially because The Rob explains that he did certain layouts as an “homage” to 1992, as if his style has evolved any since then (this isn’t to dog the man after laying down so much praise, but true is true).

If I had any sort of rating system Image United would get top marks. It’s not art-house comics, but it goes above and beyond expectations and provides an excellent superhero romp around the Image U., filling the promise made 17 years ago before each studio walled off their characters.  It’s still only the first issue and we definitely need to see if they can keep up the enthusiasm (and schedule) for 6 issues, but we’re off to a great start. 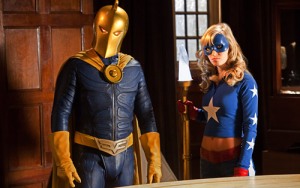