After a forced week-long vacation, I’m back on the site.  Spe 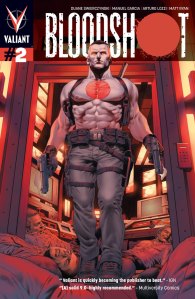 nding a week of evenings digging up your yard like a meth-addled marmot really makes you appreciate sitting in front of a computer.  And while I can’t CONCLUSIVELY prove Matt was the one who did it…well, I also can’t prove he didn’t.  At any rate, here are this week’s new and noteworthy titles.

And that’s it for this week.  What looks good to you?

After something of a dry spell, it’s time to go in-depth with some recent releases.

I’ve been somewhat lamenting the loss of Jeff Parker’s Thunderbolts lately, even before it morphed into Dark Avengers.  The frequency of releases just made me feel like it had been missing the characterization and craziness from the start of his run.  Picking up a few issues of Dark Avengers was pretty much Marvel’s last shot to keep it on my pull list.

DA is a direct continuation of T-Bolts, don’t get me wrong, but the title seems re-energized with the new name.  The real proof here is Dark Avengers #176, where the team finally seems to be putting itself back together.  Perhaps the most striking aspect of this is the return of Man-Thing to the team, and a few great lines I won’t ruin here, but it seems like where the title goes astray most is when MT or Luke Cage aren’t around; they’re the ones who make the book most interesting for me.  Now that our favorite swamp-monster is back, perhaps I’ll be able to stick around for a while longer.

It wasn’t until I was writing my Previews column that I discovered Garth Ennis is writing the Shadow now, which is probably a good sign that Dynamite needs better PR.  I snagged issues Shadow #1-2 from my LCS and enjoyed them, but as introductory issues they fall flat.  I think Ennis makes the mistake of assuming that everyone knows The Shadow’s story already, but to a guy like me, who may have just seen the old Alec Baldwin movie and not know much else, at least a LITTLE bit of an introduction would be a good idea.

Still the book is a fun read, even if you’re a little puzzled.  There’s action, adventure, travel, mystery, and oh yeah, a guy with a couple pistols who blends into the darkness.  Ennis makes The Shadow  feels like an old serial, and it’s well worth picking up if you’re a longtime fan of the character or <ahem again> not so much.

In contrast, The Spider #1-2 makes an excellent introduction to a character I’ve never read before.  All the characters are laid out and introduced (in both issues!) and the mystery is clear and well-defined while the character interactions are complex but easy to follow.  The art by Colton Worley appears rotoscoped at it’s best (not a complaint, just my best attempt at a description), though inconsistent at worst, though whether that’s due to his work or the colorist’s is up for debate.  I found it to be a much stronger book than The Shadow, I’m surprised to say, although between them I’m just getting worked up for Chris Roberson and Alex Ross’s new Masks series, which will team up the Dynamite pulp licenses.

Meanwhile, over at Image comics I’ve come to a revelation: I’m a Spawn fan.  Oh, I didn’t set out to be, but I don’t know what else to call myself.  I check in with the book periodically just to see what’s up, hit up new issues, storylines, or creators when they start.  I don’t find myself picking up every issue, but since that’s essentially the same relationship I have with Superman, I guess I have to go ahead and declare myself a fan of the character.

Spawn #220 — the 20th anniversary issue, and friends, does that make ME feel awkward! — promised some surprises and some cool homages to the original Image lineup’s covers, but then Todd McFarlane really surprised me.  Just about everything in the book is different these days, from the man in the uniform, to the mission, to the powers.  McFarlane then did something I’ve never seen before: he performed a “cover” of Spawn #1.  In this instance, I don’t mean the outside page of a comic, but rather like a cover song.  You see it all the time in music, and occasionally in movies, but I’ve never seen it in comics.  And he did it right, too.  Rather than recycling the plot points (or even worse, the art) he had artist Szymon Kudranski do what in another situation would be called an homage, but for the entire book.  McFarlane wrote the story just as if it were the next issue so it would fit in place with the story they’re telling.

Does it work?  Well, if I hadn’t been somewhat up-to-date on the Jim Downing story I would have said no.  There’s too much back-story and continuity you have to been versed in for a new reader to jump in at this point.  But as an experiment or for a semi-regular reader?  Hell yeah it does.  I fear that we’ll see too many of these cover comics now that the idea is in the wild, but damn is it a great idea, well executed.

Lastly, it’s time to apologize to Erik Larsen.  <SPOILERS Supreme ahead!>  When I discussed Supreme #64 I mentioned my disappointment with the book, but scaled some of the first draft’s rhetoric down when I realized  I had mis-remembered a few key plot points, so it never really came across just how let down I was.  Original asshat Supreme depowered all the Alan Moore members of the Supremacy and it ended with Supreme flying off, ostensibly to soldier on with his own dickish adventures.

I was happy enough to leave it there, a bad end to a great era, but then on a whim I read an interview Larsen gave to comicbook.com and this grabbed me:

“The Mean Supreme isn’t replacing the Moore Supreme. He is in addition to him. The idea here is that the surviving five will become something akin to the Hulkbusters in the old Hulk comics.”

So then it all clicked for me: Larsen ALSO considers Original Supreme the villain, and isn’t just discarding the Moore characters as I thought.  So I went ahead and picked up #65, still a bit wary, but I’m glad I did.  Larsen really does take the Moore stories as a jumping-off point for his and doesn’t just do away with them so he can move forward with his own.  He treats them as canon, and with that in mind suddenly the whole story feels more organic.  While I feel my misunderstanding is justifiable, I’m glad I came back and I’ll be keeping new Supreme on my pull list for a while longer.

After a couple painfully light weeks, it’s nice to have a hefty stack of comics to pick up this week.  Surprisingly, there are a good number of Image titles.  Marvel and DC, you’re on notice: Image is the publisher to beat right now.

So, Supreme #64.  Now that Alan Moore’s scripts have run out, it’s Erik Larsen’s turn to move the story forward.  (SPOILERS ahead!)  In a text piece at the back he talks about taking over after some epic runs during his time at Marvel, and how he feels it’s a cheat to start from scratch or ignore what’s come earlier.  Therefore, he decided to use Moore’s story as a jumping off point for his own stint on the book.  So far so good, and I completely agree with him on all those points.  Too often these days, a new creative team means a new direction and focus because the incoming team has their own ideas.  But my issue with this is that Larsen kicks off his tenure by putting an end to everything Alan Moore built.  Sure, this is comics, and a new writer wouldn’t have to work very hard to re-establish Mouse Supreme or Lion Supreme, but it wasn’t to my taste, so off the pull list it goes.

That’s enough ranting for this week.  What looks good to you?

There comes a time in a man’s life when he looks back wistfully and reviews the choices that he has made. For me that time happens most Thursday. This is the Game Tape; let’s review shall we?

First up is a look at the best issue of any book that I’ve read in a long time. Goon #39 points out every gimmicky things that Powell sees as being wrong with big company comics today, and for my money he’s not wrong. From reboots and seeming pointless costume changes to poor story craft and jab at a certain rainbow corps, this issue lampoons with a sharp wit.

Next up was an enjoyable done-in-one issue of FF. Without going into detail, this is Peter Parker and Johnny Storm being Peter and Johnny. One’s frustrated, and one is oblivious. I won’t spoil it, but the last two pages are the funniest I’ve seen in a Marvel book since Ego the Living Planet fell in love with Earth. The last page is so great and weird that I’m probably going to use it as my facebook profile pic.

Secret Avengers #26 was fairly meh. It had potential and great art, but it wasted an inordinate amount of time throwing Thor and some b-listers at the Phoenix Force.

All-Star Western #8’s minimal use of the simpering Dr. Arkham was a pleasant read. It’s hampered a little by plot exposition, but it was a decent read.

I also found a copy of Supreme #63. It was as enjoyable as I remembered earlier issues to be. That’s certainly a pleasant surprise, as I’ve recently been burned on things I’ve reread early last decade.