Geoff Johns, now DC’s Chief Creative Officer, has expended a considerable amount of time and effort restoring the DCU to what he remembers and loved as a kid.  And good for him!  He did the work, came up through the ranks, excelled at his craft, and wound up in a position to guide DC to what he likes best.  However, it does open the door for every other fan and DC-lover to do the same thing.  When we (inevitably!) become the CCO we’ll do the same thing.  As a sneak peak, here’s a preview of the things we’ll do to restore DC to what we remember as kids.

See, I didn’t start reading DC books until ’92 or ’93 with the death and return of Superman. There actually aren’t many good memories of DC when I was a kid to which I’d want to return, but there are somethings I’d do responsibly with my great power. 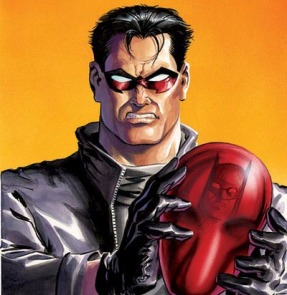 Last year I related a very special origin story.  Since then…Well, I don’t know the technical details, but in layman’s terms Superboy punched something. Recently it’s been discovered that miracles were performed in Smallville, KS, Thomas and Martha Wayne’s killer was found and brought to justice, and some new revelations have come out in regard to Matt.

Matt’s reported birth in 1936 has been found out as a fraud, a cover story for the immortality he received when, as a caveman 50,000 years ago, he bathed in the radiation of a meteor.  His time spent in the  highlands of Scotland inspired a popular series of movies and a long-running television show.  In 1938 he gained super-speed when he inhaled “hard seltzer” after an explosion during an ill-fated attempt to make an egg cream.

Matt was still declared 4F when he tried to enlist in the Allied Forces, but not for his vestigial tail, which in this timeline was seen as an asset. Because Adolph Hitler was in possession of the Spear of Destiny, military officials refused to let Matt see combat due to fear that the spear would corrupt him.  He was eventually allowed to join the French Foreign Legion after proving to the enlistment officer that he was trying to forget a flame. He spent six years inventing ribald jokes in French, making him the single largest contributor to the library of French jokes, bringing the total to eleven.

In 1986 Matt fell on hard times, earning the near-unanimous hatred of the New York social scene after single-handedly closing Studio 54 when he complained about the lack of a sneeze guard over the buffet. Undeterred, he moved to Hollywood, California, the town he help found over 100 years earlier in 1870.

“Senior Citizen Romance Consultant” is still at the top of Matt’s resume, just above “Leprechaun Wrangler” for his work on the series of Warwick Davis movies.  The stage adaptation of his original graphic novel, “Silver Age Gorillas vs Silver Age Dinosaurs on the Moon,” won a Tony Award and the soundtrack earned him a Grammy, putting him halfway to making EGOT.  The sequel, “Dracula vs Silver Age Dinosaurs,” is already being hailed as the greatest Mafia story ever written.